The Shoreham Inn has a long and colorful history. Joseph Miller built the large tavern-house in Shoreham Village in 1799, which opened as a hotel in 1800. It was run as a store by T.J. Ormsbee from 1802 until 1804, while his family lived on the upper floor. The Inn changed hands many times over the next 24 years.

In 1828, Robert H. Hunsden purchased the inn and ran it as a public house called the Hunsden Hotel until his death in 1845. Once again, transferring between multiple owners, the house eventually became known as the Bissell House and was owned by a corporation until the turn of the century.

Albert G. Dudley purchased and operated the inn as a hotel until the late 1920’s. The guest book in the front room is an old guest registry started by Mr. Dudley in 1915.  The inn was sold to Lucien Vaillancourt around 1930 who acquired a license to sell beer. He discontinued running it as a hotel and used part of the dining room as a bar instead.

The Vaillancourt family sold the building to Sam Emilo of Middlebury in 1965. Although, it is quite possible Sam actually won the building in a poker game. Not needing the large house, he offered to sell it to Robert Barrows, who made several apartments in the house to be rented out. 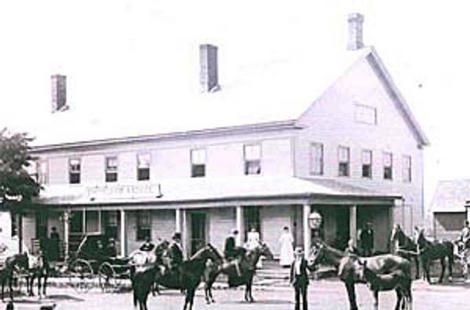 In 1973, Fred and Cleo Alter purchased the house and ran it as a bed a breakfast for over 20 years. During this time they restored as much of the old hotel as possible. They eventually purchased the brick store next door and ran both the inn and the store simultaneously until Jim and Julie Ortuno purchased both buildings from them in 1997.

Julie ran the bed and breakfast, while Jim ran the store as well as The Shoreham Upholstery shop. Bathrooms were added to many of the rooms, which helped to modernize the inn. Julie often offered a family-style dinner to local residents, once again opening the inn to the community.

In December 2005, Dominic and Molly Francis bought the Inn and the land connected to it. They installed the bar and opened the pub inside the Inn to the local residents as well as travelers all year long. The sheep barn was transported to the property in 2011 and turned into three luxury loft-style suites.  Attached bathrooms were installed into the last few rooms in the main building creating 10 complete rooms to be offered to guests.

Andrew and Elizabeth Done are the current owners, having purchased the inn in March of 2017, and are eager to carry on the tradition of upgrading and expanding the inn as each owner has done before.